The Simplicity of Complexity

A 2nd Tier presentation at the World Future Society

Don Beck and Elza Maalouf are not only furthering our understanding of human development, but also applying the understanding to important practical solutions, Integral in Action on the Large Scale. Just as Don applied Spiral Dynamics integral to creating the architecture to end apartheid in South Africa, Don and Elza are now serving the Middle East peace process through the Build Palestine Initiative. The focus is on building—building capacity, building the economy and creating jobs for young Palestinians. It is not always safe, but it is necessary. Just as necessary as the work Don is doing with Roberto Bonilla in Mexico with the Mexican Teachers Union and Economic Consul of the Mexican government. And, others in the United States and Europe are paying attention.

At this year’s World Future Society conference, attendees made their way through a maze of turns and stairs to learn how to change the world, or at least the development in the Middle East. I realized as I climbed the stairs and made the final twists and turns to find the meeting room that anyone attending New Eyes, New Lenses, New Palestine would be making a conscious decision. Yet, when I entered the room, it was standing room only. Initially I thought I heard a buzz in the room and looked around for an air conditioning vent creating noise, or the quiet chatter of participants. The only speakers were Don (Beck) and Elza (Maalouf), sharing their dialogue in the comfortable way of people who have worked together for a long time and who share a superordinate goal. The buzz was created by the energy and full attention of the participants, leaning forward to hear and to learn about how Spiral Dynamics integral was creating the framework to understand and support a root change in Palestine.

The room held a hundred seats and still more folks arrived to stand in the crowded back space. They muttered apologies to others standing (“Sorry, I’ve been looking for this room for twenty minutes!”), but everyone remained. Don and Elza introduced Spiral Dynamics integral, SDi for short, for the uninitiated. (For a greater understanding of SDi, please visit: http://www.humanemergencemiddleeast.org/technologies.html ) They included the Sherifs’ work including Spectrums on Conflict and Social Norms with the appropriate colors of the Spiral superimposed on the Spectrums. (And, when discussing relationships within Palestine and those with Israel, conflict is too often close to the surface.) The group listened intently, including those “old timers” knowledgeable in SDi, reinforcing previous understanding and highlighting new knowledge. (My “old timer” experience began as a psychology major and student of Clare Graves at Union College in Schenectady, NY in the 1970’s.) 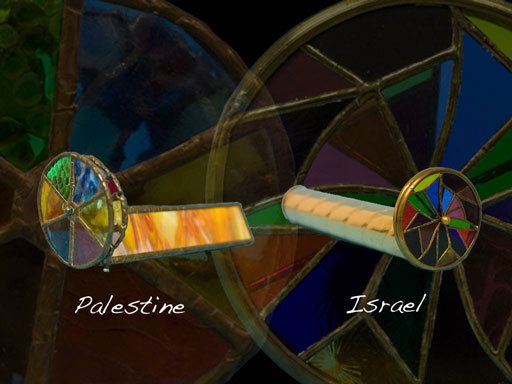 Many of us have seen how different the light looks when viewed as a kaleidoscope—its shifting images as the shards of glass turn in its chamber bring an entirely different perspective on light and the world. Don and Elza used this new symbol, both in hand and on the screen, to capture the very different lenses through which Palestine and Israel see the world and each other.

The “hum” in the room expanded exponentially when the dialogue between Elza and Don shifted to the young Palestinian leaders who want to and are leading their people in a different way. In February, Don and Elza had prepared to meet with 400 young Palestinian leaders. The meeting was to be a working session. Young Palestinian leaders were invited with the suggestion that they bring other young leaders who could truly work to build the foundation for change. There were no public announcements and no guarantee that these leaders would come. At the appointed hour, the building was empty. And then, buses, trucks and cars made their way to the site. The first dozen, then a hundred—at last the 400 that were expected. The vans, buses and trucks continued to arrive. Many had been stopped at checkpoints and detained. But they persisted. When the last bus arrived, there were 700 young Palestinian leaders committed to their people, their country and their development.

As Don and Elza shared the commitment of these young Palestinian leaders to bring peace, development and a new future to their country, the group at the WFS session listened. We heard the story of a young leader who had been jailed, but attended this February meeting in Palestine because he felt this was the only way to bring a future to his country. This Palestinian initiative was a working session and he had developed a value-systems map of Israel/Palestine and the West Bank in the colors of the spiral. The Palestinian leaders quickly grasped the colors of the spiral and began to see themselves, as well as the Israelis, in the language of Spiral Dynamics integral. Aha! They could see where they as individuals, a collective, their communities and their country needed to make the shifts and changes for their future. Their energy was high, their commitment higher. Don and Elza shared this through their dialogue, the pictures and their energy. For me, the most potent image was the photograph of the young Palestinian leader presenting the (memetic)map he had created in the colors of the Spiral.

When Don and Elza concluded their presentation and took questions, I was touched by the intensity and high level of the questions. The WFS participants were not only interested, but also knowledgeable. Their questions—including follow up questions—reflected a deep level of commitment. They understood the superordinate goal of understanding the world and employing SDi as a tool to bring understanding and a change force to the issues. They also seemed to grasp the importance that this change could not be achieved unless it was initiated, directed and implemented by these young Palestinian leaders deeply invested in their own country or culture.

In a later dialogue, Elza and Don talked about the young Palestinian leader who created the “spiral map” as one who has emerged into “Red/Yellow.” He has grown up in a culture steeped in the red environment of Gaza, yet has emerged into Yellow, not “in spite of” his life conditions, value systems, world views and existential challenges, but because of them. And, he is one of many in this group of young Palestinian leaders. They are, what I have come to call “2nd Generation 2nd Tier.”

During my previous research on how individuals centered in 2nd tier create/experience meaning in their work and life, I began to hear stories about younger (often the children of my co-researchers/participants) adults who truly seemed to have emerged into 2nd tier, but through different paths than their parents or those participating in the research. The examples appeared to “jive” with observations I had been making about similar young adult individuals in the US and Europe. These young individuals developed in Blue/Orange or Green environments when emerging into Yellow. The young Palestinian leaders have emerged from an environment rooted in Red, yet many are still emerging into 2nd tier adults. (The co-researchers/participants from western cultures in my initial study developed in environments rooted in Red, Blue, Orange and Green.) As a newly appointed research fellow with the Center for Human Emergence—Middle East, Elza and I have discussed including some of these 2nd Generation 2nd Tier young Palestinian leaders in my research of 2nd Generation 2nd Tier young adults from western cultures. This would expand our understanding of this emerging group and provide a more complete worldview understanding of 2nd Generation 2nd Tier individuals. As an organizational research and development consultant and as a professor, my work is focused primarily on the organizational and cultural levels. As a researcher, my interests and research in human emergence have focused on the individual. By understanding individual emergence, I’ve deepened my understanding of organizational and cultural emergence and the contribution that individual emergence offers to both organizational and cultural emergence.

My own personal interest and developing understanding of Spiral Dynamics integral began as a student of Clare Graves and continued with my ongoing education in Spiral Dynamics integral with Don Beck. Graves was my advisor and professor during my undergraduate years as a psychology major at Union College. Learning the “Bio-Psycho-Social Double Helix Model of Emergent Adult Development” (should any folks wonder why Don changed the name to Spiral Dynamics integral?!) from Graves shifted my worldview—in fact offered the worldview from which I could understand individuals, cultures and the world. In “Organizational Psychology”, Graves would sometimes reflect on the companies to which he consulted. Many were firmly centered in “D-Q”, what we now understand as the Blue vMeme. Don had begun working with Clare Graves while I was Graves’ student.  Don and Clare spoke at many professional meetings together, when I was still a student at Union, and for many years after. Don and Clare spoke at a WFS meeting in 1983. Don has continued speaking at the WFS since that time.

I thought of this background and frame when one WFS member ended the session with a reflection. He noted that when he first joined the WFS several decades ago, it was truly an organization steeped in the Blue vMeme culture. Over the years, he noted, he watched, felt, and participated in the emergence of the organization into the Orange vMeme culture, and now into the culture of the Green vMeme. The participants at the session probably reflected those vMemes as well as the shift and emergence through all of those vMemes. Elza and Don presented in the language of Yellow, and were universally understood by all.