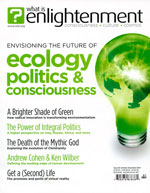 A New Perspective for Palestine

By Igal Moria and Elizabeth Debold
What Is Enlightenment magazine

“Elza Maalouf and Don Beck are bringing the wizardry of Spiral Dynamics to the West Bank and Gaza Strip.”

In the wake of decades of war and conflict in the Middle East, the last thing the region would seem to need is another crisis. But Dr. Don Beck, the world's foremost expert in the systems-change theory of Spiral Dynamics Integral, surprisingly argues that crisis—a particular kind of crisis—is just what is needed. [Visit wie.org/spiral for more on Spiral Dynamics.] Beck has made four trips into this conflict zone in the past 18 months, joined by his partner in Center for Human Emergence Middle East, Elza Maalouf. Maalouf, a lawyer and integral consultant born and raised in Lebanon and now living in the U.S., has been instrumental in arranging strategic meetings with leaders in Palestine and Israel in May. The two successfully completed and intensive training in Spiral Dynamics Integral with members of the executive committee of the Fatah movement. They have also launched the Build Palestine initiative which will attempt integrate the influx of aid and support from the 4,200-plus non governmental organizations [NGOs] that want to help the Palestinians move forward.

But as Maalouf and Beck explained in a recent conversation with WIE, it all has to start with crisis - a crisis that would spur the Palestinians to realize that something fundamental has to change among themselves. The Fighting in the streets of Gaza between adherents of secular Fatah [which means "victory"] and fundamentalist Hamas [which means "zeal"] could be such a catalyst. It may enable the Palestinians to see that the problem isn't simply the Israeli occupation of Arab lands, but that they have deeper issues to confront about who they are and where they are going. At least, that's what Maalouf and Beck believe is starting to happen.

The two note that, due to an increasing recognition of the need for development there seems to be a shift in thinking about even the most sacrosanct issues, such as the readiness for an independent Palestinian state. "At present, Israel is a development-prone culture, whereas Palestine is a development-averse culture for many reasons." said Maalouf. "This needs to change, and it will happen through education and job creation, but it's going to take time." She pointed to a statement made in recent letter to Tony Blair sponsored by the Center for Human Emergence-Middle East, in which a group of young Palestinian leaders wrote:

"If the occupation disappears tomorrow, are we ready to build an independent state? We know that as prerequisites to Palestinian statehood we need to build healthy institutions for a well functioning government: build capacity in our people to enable them to take Palestine to the twenty-first century: address the psychosocial problems inside the Palestinian communities caused by decades of conflict; and build sound economic, education, judiciary, religious and healthcare systems for a well-functioning society."

Such complex problems in cultural development are the kinds of issues that Spiral Dynamics is meant to resolve by changing the core values, motivations and world-views within a society. As Maalouf explained, subtle shifts in people's motivations could create significant change: "The Palestinians who live in the refugee camps are descendants of Arabs who fled Israel during the wars of 1948 and 1967. These refugees' desire to go back to their family homes has been the thorniest issue during any negotiation between Israel and the Palestinians. Many of those homes no longer exist and as for those that do, Israel does not intend to give them back. These refugees see life as a jungle where the strongest survive, and where honor is held in higher regard than life. Thus, getting back the family's home is about restoring lost honor. If you understand that there is this strong need, then you can help them change how that need is met." Maalouf and Beck worked with the Fatah leaders to help them see that Palestinian men could gradually develop a different code of honor. "Instead of these men believing "I'm not a man unless I get my family house back." Maalouf continued, "they can satisfy their need for honor by aligning with the idea that "I am not a man unless I secure the future of my children and my grandchildren." This would serve as a different attractor, and our trainees understood that."

Even creating a new "attractor" if successful, it will undoubtedly take time - time that this volatile area simply might not have. Given the urgency of the situation, Beck urged the Fatah leaders to seize the rare opportunity they now have. "There are over four thousand NGOs in Palestine. They are well-meaning organizations, but unfortunately their work is never aligned, and quite often their efforts are fragmented, ad-hoc, piecemeal projects without a comprehensive command structure that leads to sustainable outcomes. We told the Palestinians that because of world's attention and interest, they have more power and influence today than they probably ever will have again." But if the Palestinians don't organize and coordinate the money and projects flooding into the area, all of the goodwill could be wasted. This is the idea behind the Build Palestine Initiative. "You need to mobilize all the NGOs and focus them like laser beam." Beck said. "So we're recommending the establishment of an 'Integral office' in the government, one of the main purposes of which would be to guide and direct all the help pouring into Palestine to strengthen the educational systems and create job opportunities for people."

If this office is established and the Initiative gets underway, the theory of Spiral Dynamics would be well suited to guide its implementation. Spiral Dynamics could help leaders determine the natural strengths of different sectors in Palestinian society and thereby integrally utilize the efforts of NGOs from so many different cultures. As Maalouf clarified, "The only way you can have NGOs contribute wisely to a successful Palestinian state is to analyze the value codes they represent. So for example, you would not ask a Scandinavian NGO to help you start a police force in Palestine, because Scandinavians aren't accustomed to the volatility of life in the Middle East. But you may want to ask them to help you design a healthcare system or create an environmental policy." Beck noted that there is enough money coming through international aid to shift the value structure of the Palestinians as a whole. Through education, job creation, healthcare and real stability, he said, “the Palestinians could develop a more complex and evolved system of values that faces them toward a new future for themselves and their families.”

The challenges are formidable, and many a well-intentioned project has failed in this global hot zone, but Maalouf and Beck remain cautiously optimistic. "We saw transformations in our training." said Maalouf, "especially with the resilient young men and women who honor the past but are determined to change the present and create a better future." Beck added. "They took the tools that we gave them and used them to see this all for themselves. The conditions for change are starting to line up, and things are going beyond our expectations." In such an entrenched conflict, optimism is a rare commodity- Perhaps a new willingness to take stock and move forward that may be emerging in segments of Palestinian society – when combined with the goodwill of so many nations and NGOs and synergized within the Integral framework of Spiral Dynamics – will enable the development of stability that this area so desperately needs.

Reprinted with permission from What Is Enlightenment? magazine; October-December 2007.